Hebert Welsh wrote many books, advocating fairness for Native Americans, civic reform in Philadelphia, and condemning the shameful use of torture by the American military in the Spanish-American War. The one that I’m following is The New Gentleman of the Road.  Published in 1921, it was first written as a turn-of-the-century proto-blog, in a series of “letters” to the Philadelphia papers. 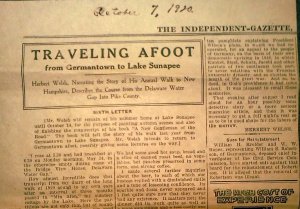 Here is the sixth letter from his 1921 journey. Note that it’s the record of day in May, not  published until October. Timeliness isn’t what it used to be.

Welsh’s prose style is of its time, too: Our hero has stopped at the Joan of Arc Hotel in the Delaware Water Gap.

A French lady welcomed us with a friendly charm that was in itself a benediction. This became more pronounced when I ventured to address her in her own tongue with an inquiry as to whether something to eat could be had promptly and whether a bottle of beer of the prohibition variety, strictly legal, and devoid of alcohol, might also be expected.

On earlier walks, Welsh could enjoy a full-strength glass. But in May 1920, despite Mademoiselle’s  assurances:

I made several further inquiries about the beer, to each of which our hostess replied with a diminished smile and a tone of lessening confidence.  Its sparkle and foam never appeared. I feel quite sure now that they never had any existence.

The synecdoche of  that “sparkle and foam” is rather lovely, if a little fusty. A reader of The New Gentleman of the Road will come across countless such classical figures of speech, but not much introspection. He doesn’t, for instance, ever ask or answer the obvious question: Why walk? But I will venture to address that mystery on my way.

3 thoughts on “The New Gentleman of the Road”

Photos along the Back Roads Home