There is at least one American path, heading from East to West, leading neither into the possibility of the future, nor the morning of the world and of humanity. In the 1830s, we the people of the United States removed tens of thousands of Native Americans from their homes in the southeast and sent them marching west to the Indian Territory (Oklahoma). Thousands died, along what is now known as the Trail of Tears.

Jerry Ellis, a Alabaman writer of Cherokee heritage, walked back to Alabama from Oklahoma and wrote Walking the Trial 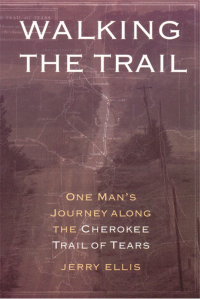 in 1991.  It’s a exemplary walking book, mixing memoir and desire, the political and the personal, historical epic and sore feet. Ellis rambles some, but he stays on his path. He meets a representative sample of Americans on the way, some who know more about the trials and tribulations of his ancestors than Ellis; some who live next to the Trail and have never heard of it.

A fascinating digression: Ellis falls in love. Looking for a place to sleep, he wanders, with trepidation, into a Christian hippie commune in Missouri. “Zion’s Order” is one of those pure products of America that thrive under wide horizons and religious freedom. Venda is a young woman who was born and raised within the compound.

Jerry meets Venda, and they fall in love, in a stumbling unconsummated romance–a story too real for fiction. Like Ellis’s writing and walking, his love affair somehow melds deep meaning and random events.  Its sudden starts, twists and stops seem less literary than literal: I believed in this strange assignation, because it seemed absurd.

Following this walk and such stories, I found myself humming the songs of The Old, Weird America, that invisible republic that Greil Marcus and Harry Smith repopulated, largely with the ghosts of black folk and criminals. But there are also Native spirits in the air–after all, Smith, “As a schoolboy, swirling in the irregular orbits of his parents’ religion, their fantasies, their poverty and delusions of grandeur, … discovered the local Indian tribes.”

That was years before Smith ever walked the Mississippi Delta, listening for America. Jerry Ellis meets some strange folks, as he crosses Arkansas, Missouri, the odd corner of Illinois, Kentucky and Tennessee, making his way home. He hears strange tales–not the least strange, as he tells more of it: the forgotten concentration camps, ethnic cleansing and genocide of his native land. The tales of my land include incest and insanity; but nothing is too weird for America.

I’ll be scouting for evidence of Native America as I walk in May. Not just because  Hebert Welsh, whose footsteps I’m walking in, was an Indian rights advocate. But because it’s “as if the earth under our feet / were / an excrement of some sky” in the words of William Carlos Williams, and it is a Native Sky.

Photos along the Back Roads Home